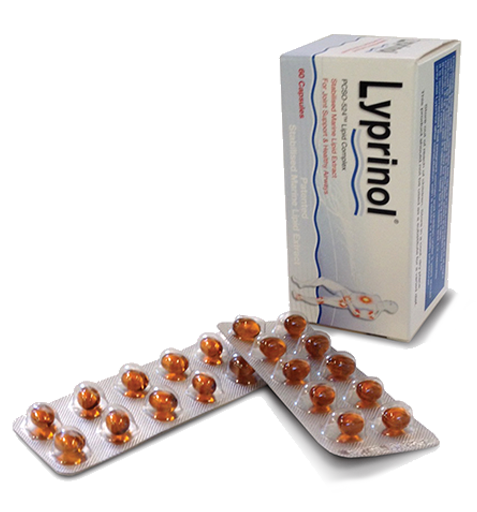 Now in South Africa - a breakthrough treatment for osteoarthritis, rheumatoid arthritis and asthma

A patented and stabilised natural marine lipid extract comprising a rare combination of lipid groups and unique Omega-3 polyunsaturated fatty acids known as PCSO-524™. Lyprinol® has been shown through clinical research to be an extremely potent anti-inflammatory.

Lyprinol® is a mixture of five main lipid classes including sterol esters, triglycerides, free fatty acids, sterols and polar lipids. There are approximately 8-10 different marine sterols in the sterol esters and sterol fractions. It also contains more than 30 different essential fatty acids which are mixtures of saturated, monounsaturated and polyunsaturated fatty acids.

A product from the sea

Following fifteen years of international scientific research by independent scientists from the Royal Melbourne Institute of Technology University, the goal of identifying the principal components responsible for the extract's high potency was achieved. The compounds were patented and trademarked, PCSO-524™ which is then formulated in to the product Lyprinol®.

PCSO-524® is the name given to the active component of the Lyprinol® formulation. PCSO-524® contains 92 fatty acids and is what gives Lyprinol® its potent anti-inflammatory action. PCSO-524® is the result of decades of research and development and has been shown in numerous published trials to be a powerful natural anti-inflammatory for which there are no known adverse side effects*.

How it is made

Improving the quality of your Life

The launch of Lyprinol in SA, now offers a natural therapy to help reduce chronic pain in people suffering from osteoarthritis, rheumatoid arthritis and asthma. It has been shown to be more effective than certain non-steroidal anti-inflammatory drugs (NSAIDs) while exhibiting none of the side-effects normally experienced during NSAID treatment. One study undertaken at the University of Queensland showed that Lyprinol outperformed Indomethacin & Ibuprofen by 2:1. Subsequent trials showed that Lyprinol was 175 times more potent than evening primrose and salmon oil and that it was 200 times more effective than flax oil in controlling arthritic joint swelling. Lyprinol is a natural marine extract from the oil of the New Zealand green-lipped mussel (Perna canaliculus) and is the most studied natural alternative known to provide relief from inflammatory pain and asthmatic symptoms.
Even people who are allergic to seafood and shellfish can safely use Lyprinol as it contains no protein. It is a rare combination of five lipid groups, including omega 3 polyunsaturated fatty acids (PUFAs), which are vital in maintaining health. More specifically, it is rich in the omega 3s, eicosapentaenoic acid (EPA) and docosahexaenoic acid (DHA), which are known to be potent anti-inflammatory agents. What makes Lyprinol unique, is that it contains two additional PUFAs, namely ETA and OTA that are not found in fish oils. These omega 3 PUFAs play an important role in blocking the production of pro-inflammatory enzymes such as 5-lipoxygenase (5-LOX) that synthesize leukotrienes, which cause inflammatory diseases such as osteoarthritis and rheumatoid arthritis which are associated with chronic pain caused by inflammation of the joints. Lyprinol helps to reduce this type of chronic pain. The majority of studies showed a reduction in joint tenderness, pain and morning stiffness and improved grip ability.
Lyprinol also helps asthmatics as it inhibits the formation of broncho-constricting leukotrienes. These leukotrienes are partly responsible for the production of excessive mucous and the constriction of the bronchial airways. A study conducted at the Pavlov Medical University Hospital in St Petersburg, found the following results after only 56 days. There was a 50% reduction in rescue medicine, a 65% reduction in exhaled H2O2 (hydrogen peroxide), a significant reduction in chest tightness and the incidence of night-time attacks. They concluded that Lyprinol was an effective means of treating inflammation in the airways. All three of these conditions can be debilitating and reduce the quality of your life. Note, that in all the above conditions individual results may vary.

Lyprinol, a new addition to the Master Health Product’s range can change this and is available on their online shop at www.masterhealthproducts.co.za

just say hello! or send us a message